What temperature should my salmon tank water be? 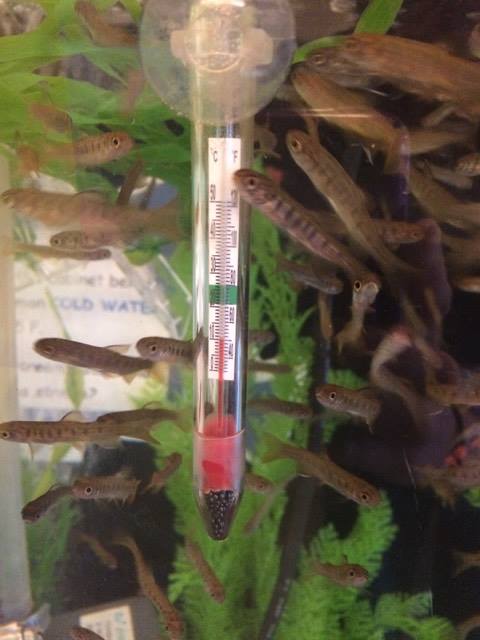 As a general rule of thumb, salmon do best in water temperatures between 45-55 F, and SITC recommends setting tank chillers right around 50 F.

Should I lower the chiller setting, since the salmon are used to lower temperatures at the hatchery they’re coming from?

Even though your Coho eggs or fingerlings may be arriving at your school from colder water temperatures at the hatchery, we still recommend setting your chiller at 50F (or somewhere between 48-52 F) for a couple reasons:

1. The first has to do with the “Goldilocks syndrome”. Some SITC teachers have had issues with something called Bacterial Coldwater Disease, which is especially common among Coho alevin. Fish are more susceptible to this when water is below 50F. As the water temperature rises above 50F, our fish are more susceptible to a different set of pathogens and water quality issues. So 50F is a pretty safe bet for us, reducing the potential for stress from pathogens and poor water quality (i.e. ammonia toxicity increases with temperature).

2. The second has to do with condensation. If the tank water is really cold, but our room is warm, we’ll see condensation forming. Not just on the tank walls (which collects in a drip tray), but also on the chiller tubing inside the tank stand and on the back of the waterfall filter. This condensation can potentially drip into power strips (if no drip loop is installed) which becomes a safety issue. It may also drip onto wood surfaces, damaging expensive equipment.

It’s true that rapid temperature changes cause fish stress, and the more you help your fish with that transition, the happier they’ll be. SITC recommends slowly introducing eggs to the tank, lowering your stocking into the tank several times before spreading eggs onto the gravel. We also transport fingerlings and fry with dechlorinated ice and a little salt to reduce stress.